A Biography and Memoir of Daniel Berrigan 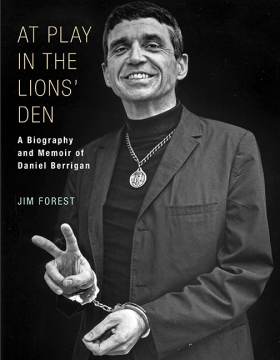 Daniel Berrigan (1921-2016), a Jesuit priest and poet, was one of the pre­eminent Christian peacemakers of his time. After gaining notoriety in 1968 through his role, along with his brother Philip, in de­stroying Vietnam-era draft files as part of the Catonsville 9, he helped elevate the Christian conscience with regard to issues of war and violence.

But Berrigan’s efforts on behalf of life also in­volved care for the dying and ministry to those suffering from AIDS. Jim Forest, who worked with Berrigan in building the Catholic Peace Fellowship in the 1960s, draws on his deep friendship over five decades to provide the most comprehensive and intimate picture yet available of this modern-day prophet. Extensive photographs and quotations from Berrigan’s writings complete the portrait.

Jim Forest is an internationally renowned peacemaker and spiritual writer. His many books include biographies of Dorothy Day (All is Grace) and Thomas Merton (Living with Wisdom). His most recent book is The Root of War Is Fear: Thomas Merton’s Advice to Peacemakers. He lives in Alkmaar, the Netherlands.